Applications servo motor that works on the principle of a servo is used in a large number of applications which are critical for position control. We cannot use a DC motor to control an airplane’s tail because controlling a DC motor for precise positioning is not only difficult but almost impossible. In applications like this, we rely on a servomotor to get the right job. Now we will discuss various applications of a servomotor.

One of the most popular applications of the servomotor is robotics. Consider a simple pick-and-place robot. A pick and place robot is a robotic machine that is used to select an object from one location and place the object in a different location (as its name suggests).

Now, to select an object from position A and position it in position B, the motors used to drive the joints are servomotors. This is why; We need to plan the angular movement of each joint to complete this selection and positioning task.

Once this data is sent to the robot controller, the robot will do its job continuously. The controller will send the PWM data to the individual robot motors. This provides precise angular control of the arm which is not possible with a normal DC motor. The application of servomotors in robotics can be experimented on a small scale in electronic projects. The best Arduino starter kits will include a small servo motor for experimentation.

Conveyor belts are used in industrial and production assembly units to move an object from one assembly station to another. Let’s consider an example of the bottle filling process, in the process the bottle must be filled with the liquid and go to the next phase, which is mainly the packaging phase.

To do this, the conveyor belts are used with servomotors so that the bottle moves exactly to the desired position and stops so that the liquid can be poured into it and then guided to the next stage. This process continues until it stops. Therefore, the precise ability to control the position of the servo axis is useful.

Modern digital cameras today are very advanced. One of the advanced features is the ability to automatically focus on the object to be captured. When the image of the object is created within the camera’s digital signal processor, its sharpness is checked

Modern digital cameras today are very advanced. One of the advanced features is the ability to automatically focus on the object to be captured. When the image of the object is created in the camera’s digital signal processor, its sharpness is checked.

Basically, if the focal length (measured by the camera lens) is not adequate, the image appears blurry. The corrective action to accurately position the lens to capture the sharpest image is performed using a high precision servo motor installed inside the camera. This is another important example of applications for servomotors.

Today’s robotic vehicles used for highly complex military and industrial applications use wheel servomotors. Here, angular movement is not important since the servo used is a continuously rotating servo. What matters is the servo’s ability to generate enough torque to quickly move the vehicle from above and then stop it quickly. You can also control how fast the vehicle has to move

To understand servomotor control, consider an example servomotor where we gave a signal to rotate at an angle of 45 °, then stop and wait for further instructions. The DC motor shaft is coupled with another shaft called the output shaft, with the help of the gear assembly. This gear set is used to reduce the high rpm on the motor shaft to low rpm on the servo system output shaft.

The generation and use of solar energy is gaining in importance as people move towards a clean and renewable energy regime. Previously, the installed solar panels were static and remained in one location throughout the day. General science dictates that the Sun is not always oriented in one direction and that it will change its position relative to the solar panel. This implies that we are not taking full advantage of the sun’s power to extract maximum energy from it.

To understand servomotor control, consider an example servomotor where we gave a signal to rotate at an angle of 45 °, then stop and wait for further instructions. The DC motor shaft is coupled with another shaft called the output shaft, with the help of the gear assembly. This gear set is used to reduce the high rpm on the motor shaft to low rpm on the servo system output shaft.

A voltage adjustment knob of a potentiometer is arranged with the output shaft by means of another group of gears, which during the rotation of the shaft, the knob also rotates creating an electrical potential that varies according to the potentiometer. 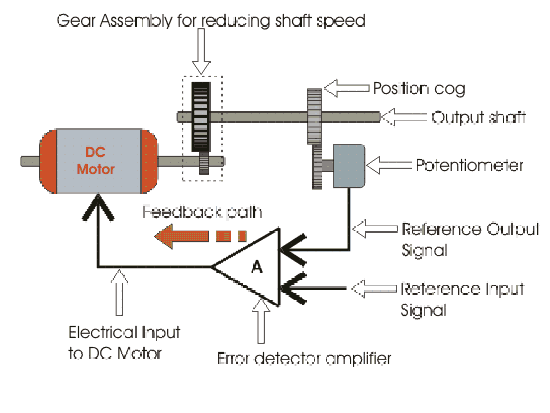 According to the image above, the output voltage signal of the amplifier acts as the input voltage of the DC motor. Therefore, the motor will stop rotating after the shaft rotates 45 °. The motor will be in this neutral position until another command is given to the system for further movement of the axis in the desired direction. From this example we can understand the theory of basic servomotors and how control of servomotors is achieved.

NB: although in a practical servomotor control system, instead of using a simple / potentiometer-operating-principle-of-potentiometer / we use a digital or analog encoder for position sensors.

This basic operating principle of the servomotor can be concluded. The servo Applications shaft is connected to a potentiometer. The circuit inside the servo, to which the potentiometer is connected, knows the position of the servo. The current position will be compared continuously with the desired position with the help of an error detection amplifier. If a mismatch is detected, an error signal is provided to the error amplifier output and the axis will rotate to go to the exact position required. Once it reaches the desired position, it stops and waits.

The servo motor controller can be used to control a single servo or even a group of servomotors. In many projects where servomotor control is the cornerstone of the task, the controller must drive more than one servo. An example of this is an RC plane, which uses many servos.

A servomotor is operated by applying the voltage signal at regular intervals. The servant is sensitive to changes in time. A pulse of a specific width must be applied at specific time intervals. Typically, the pulse duration varies from 0ms to 2.2ms and the repetition rate is from 50Hz to 60Hz. For precise position control, the chosen controller must have timers with the required resolution. Also, if you need to control more than one engine at the same time, the processor clock must be fast enough. For single engine control, an 8051 can be used as an AT89s51 or P89v51RD2. But for more than one engine, we must use a PIC, such as a PIC18F or ATMEGA, so that its internal PWM can be used. However, the selection of the microcontroller depends entirely on the designer and the project requirements.

The design of the power supply servo motor controller depends on the number of servomotors connected to the board. The servomotors operate with a supply voltage between 4.8 V and 6 V. The typical value is 5 V. It is not recommended to apply voltages higher than the supply voltage, as this can render the motor useless. The current consumption of the motor is variable and depends on the torque it generates. In addition, it will consume less current when in idle mode and more current when running. The maximum current consumption of the servomotors is provided as a stop current. This is the maximum current it will absorb when operating at maximum torque before stopping due to an overload. This current value can reach 1 A for some motors.

For a single motor control, a voltage regulator such as an LM317 can be used in combination with a suitable heat sink. But when you need to connect multiple motors, you need to use a high quality power supply with a higher rated current. An SMPS (switching power supply) can be a good choice.

Block diagram below showing the interconnections in a servomotor

The servomotor has three terminals.

To generate the PWM (Pulse Width Modulation) waveform, as shown in the following figure, you can use the internal PWM module of the microcontroller or the timers. The use of the PWM block is more flexible since most microcontroller families design and this PWM block is more suited to the needs of applications such as a servomotor. For different PWM pulse widths, the internal registers must be programmed accordingly.

Now we must also tell the microcontroller how much it has to rotate. For this purpose we can use a simple potentiometer and use an ADC to obtain the rotation angle or for more complex applications it is possible to use an accelerometer

We design the program to control a single servo and the position input is provided through the potentiometer connected to a pin of the controller.

Read the ADC for the desired servo position.

Program the PWM registers for the desired value.

As soon as the PWM module is activated, the pin of the selected PWM channel becomes high (logic 1) and after reaching the required width, it will go back (logic 0). So after activating the PWM, you need to start a timer with a delay of about 19 ms and wait until the timer overflows

There are several PWM modes that can be used based on the chosen microcontroller. Some degree of optimization needs to be done in the code to control the servo.

If you plan to use more than one servo, you will need as many PWM channels. Each servo can receive the PWM signal in sequence. But you have to be careful to maintain the pulse repetition rate for each servant. Otherwise the servant will run out.

If you plan to create your own servomotor controller board, provide the appropriate thickness for the rails that carry power to the servo. Appropriate checks of the ERC and DRC rules must be followed. PWM signals for a continuous rotation servo are not the same as a 180 degree servo. It is necessary to consult the technical data sheet of the servos for these motors.

A servomotor is critical for voltage fluctuations and too high a voltage can damage the internal feedback control circuit. Therefore, the power supply must be completely designed according to the servo specification and verified before implementation. The heat sink should be used if necessary.

Protection and Control System Impacts from The Digital World

A substation is a switchyard facility which hosts power equipment, e.G. Transformers, circuit breakers etc. for remodeling an incoming voltage…

Gone are the days of the easy electro-mechanical relay with out firmware and conversation interfaces. The reality exists that protection…

Winding electrical instruments are not directly connected to the meters or control apparatus of high voltage for safety purposes. The…

Support of smart grid is an electrical grid which incorporates a spread of operation and energy measures including smart meters,…

The full form of OPC communication is OLE for process control. The OPC Foundation is the nonprofit corporation and established…

USAGE: Synchronous motors are mainly used for the robotics and and it will be used in the another automation field….

COIL USAGE: It is mainly used for the torque reversing of the DC motor and also the coil move through…

USAGE:Before understanding the working principle of servo motor we should understand first thebasics of servomechanism. A servo system primarily consists…